It was quite an eventful weekend for me. Friday afternoon, the lawn guy at my boyfriend’s house let his back gate open, and Jarold’s very feisty black lab, Bo, decided to have a little adventure. So as of Friday night, we had no idea where Bo was. Of course, Jarold was absolutely a mess. Bo is his buddy, his baby. I’ve never been a man so upset in my life. He didn’t even want to play with Gracie, because he felt that he was betraying Bo if he did. Poor guy.
See Bo’s photo below. 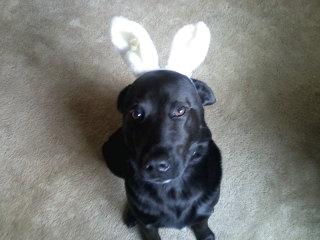 Saturday morning came and still no Bo. Jarold drove around the neighborhood for hours and hours, yelling out Bo’s name. No one knew where he went. Finally, I saw a Craigslist ad for a “Found Black Lab” with Bo’s photo. Thank goodness, we thought! So we contacted the man who posted the ad… but it turns out, Bo had escaped from his place. So the search continued.
We spent all of Saturday afternoon and evening in the search for Bo. I posted a classified ad in the newspaper, Craigslist posting for a lost Black Lab. Then, we went all over the neighborhood posting flyers. We probably printed over 200 flyers in the search for Bo. We put posters and flyers within a five-mile radius of Jarold’s house.
Fortunately, we received several phone calls from people who claimed to have spotted Bo. So we drove to those locations, but no Bo.
By Sunday, we were beginning to give up some hope. Bo had been gone for two days and we couldn’t find him at all. There were no phone calls on Sunday so we believed that something horrible that happened to him, or perhaps Bo had been dog-napped by something who found him and took him in. (Bo is a very friendly black lab).
But I have good news to report. We found Bo at the shelter on Monday. He ended up being taken to the country, where he escaped and was just running wild. The Animal Control people found him and brought him in. Luckily, Jarold called them on Monday afternoon and they told us that they had a black lab in custody.
We finally have Bo back, and let me tell you, he was EXHAUSTED from his trip. Jarold had Bo micro-chipped so hopefully this will never happen again. The poor guy lost his collar somewhere along the way.
But Gracie has her big brother back…. Here is Gracie in her newest outfit — a fireman outfit. Isn’t Gracie the fireman so cute?