Mama and I love baby animals, and horses are one of our favorite animals. We want to introduce you to a pinto stallion named Einstein – the smallest horse in the world.

At just three days old, Einstein was only 14 inches high and he weighed 6 pounds! That is smaller the average human baby. Isn’t he adorable?

Here is Einstein, the Smallest Horse in the World, with a Young Human Child 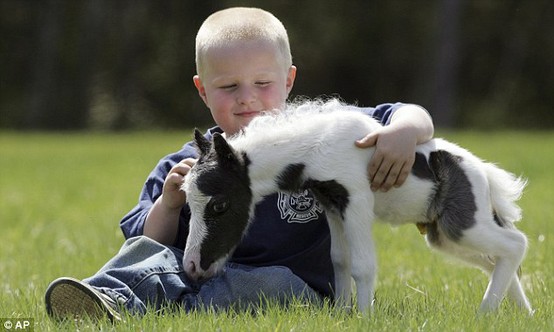 Einstein was born in April 2010 at Tiz Miniature Horse Farm in Barnstead, New Hampshire. Since his birth, he has become quite a horse celebrity. He was on Oprah (when the diva was still on network TV), and been in numerous national newspapers in the US and in the UK.

The world’s smallest horse was sold and now owned by horse enthusiasts, Charlie Cantrell and Rachel Wagner. He lives in Gilmanton, New Hampshire on their small farm.

1-Year-Old Einstein is Standing Next to His Cousin, Playboy (below) 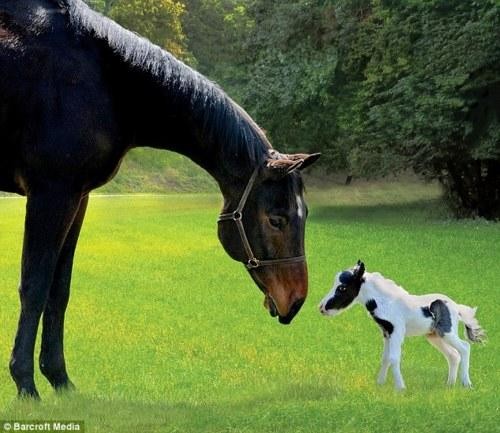 Einstein is an amazing little horse because he has no dwarf characteristics. He’s just a small miniature horse, even shorter than his mom. His mother, a horse named Finesse, is 32 inches tall and his dad, named Painted Feather, is 30 inches tall.

His owners are pretty sure that he has stopped growing, but he can’t be officially recognized as the world’s smallest horse until he’s four years old.

Here is Einstein standing next to a St. Bernard dog

He is just so cute! Don’t you just want to play and cuddle next to Einstein? We love his name, too!