This is a baby Snub Nose Monkey. Isn’t this the cutest, fluffiest little baby monkey you’ve ever seen? Don’t you just want to take him and cuddle with him and give him kisses? Mama and I sure do. He is just so, so cutes! It is hard to resist a fluffy face like that! 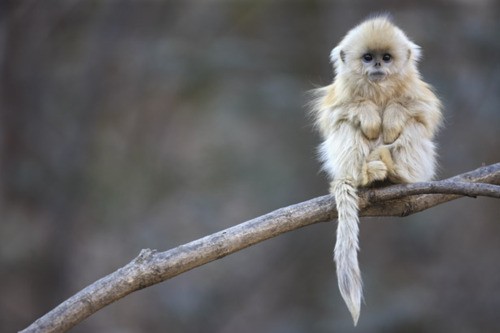 This species of monkey has such a furry, luxurious coat, because he lives in a very cold environment. He and his fellow primates live in high altitude isolation, and spends his days leaping across branches at around 10,000 feet. The Qin Ling Mountains have very long winters, and he’s got to have that soft coat to keep him warm.

There are only 20,000 golden snub nose monkeys left in the world. But there are around 4,000 of these cute monkeys that live in the Zhouzhi National Nature Reserve in China, which protects these primates.

Here is an older golden snub nose monkey with a blue face. He’s cute too!