I took Gracie Lu on a play date with some of my co-workers puppies, a 6 month old mini-schnauzer and a 1 year old Yorkie. It was quite an experience. Gracie has never been around any other dogs (beside my boyfriend’s black lab), so she didn’t know what to make of them.
When I first pulled up, the two dogs — who were full of energy — charged toward Gracie, scaring the heebie-jeebies out of her. She whined and barked in her high-pitched voice (which she does when she’s scared) and ran underneath the car. As the puppies ran up to her, she ran away. She ran toward the fence of the property, scared of her wits. The dogs, of course, chased after her.
Mama came and saved her. I picked her up in my arms and gave her plenty of kisses and love. This calmed her down. Once I got inside the building, we sent the mini-schauzer away, since he was the most active. When we got Gracie together with Wang-Foo (the yorkie), she seemed to calm down a little bit. Then, a few minutes later, they started playing together. Gracie started to bark and chase after him (which she does with Mr. Pumpkin, my cat). I think she ended up scarring Wang-Foo. But it was fun, and I think she enjoyed his company.
Here they are checking each other out . . . 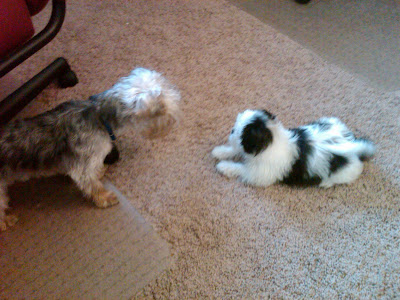 Later in the day, we introduced Sherlock (the mini-schnauzer puppy) and they checked each other out. But I think Gracie was still too scared of him for some reason. Possibly because he was so overactive and kept stealing her puppy food. (Sherlock sure was a food stealer!) He was also much bigger than she was.
A photo of Sherlock and Gracie together . . . 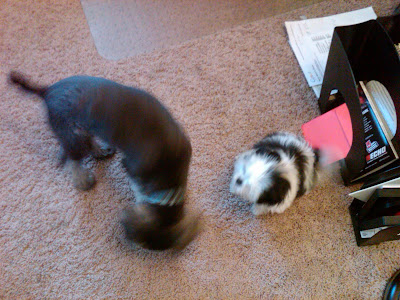 I think of sending her to puppy daycare sometimes. Maybe take her there a couple days a week, when I’m at work. (I work Monday through Friday until 5 p.m.). She’s in her crate all day, so I do feel guilty about that. I think she would be more socialized around other dogs. She sees Bo (the black lab) very often, but I don’t think Bo (who is an adult, about 4 or 5 years old) has any interest in her at all. He runs away whenever she comes close to him. I need to snap a photo of the two of them together some time.
Here’s two photos of Gracie and me after her play date. She was simply exhausted! Look at that cute little face.

« Riding in the Car with Gracie
An Awful Dog Finding Weekend »