Before I go into my story, I would like to re-introduce my cat to this blog. (I’ve blogged about him before, but just in case you forgot.) This is my flame-point Siamese – Mr. Pumpkin. He is very friendly, and about five years old. He basically came into my apartment as a stray, and kept returning. Eventually I discovered that he had no owner, so I decided to adopt him. 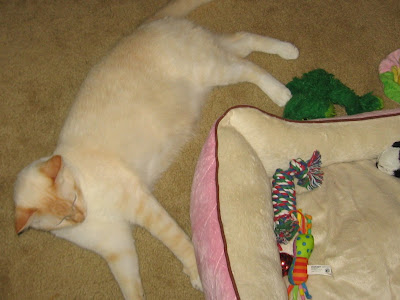 One of the reasons that I decided to get Gracie was because I thought Mr. Pumpkin was getting a bit lonely without a friend. I didn’t want to adopt another cat, and I have wanted a dog forever. And fortunately, Mr. Pumpkin gets along very well with his sister, though I think he gets annoyed with her sometimes. But whenever I am busy and can’t pay attention to Gracie, I always find her right by her big brother’s side.

They have the cutest ritual in the morning where Gracie barks at Mr. Pumpkin, and then they begin their chase. All over the house. Mr. Pumpkin will sometimes hide, or jump on top of something, and when Gracie comes along, he pounces on top of her for a brief second and jumps off. Then the chase continues. When Gracie doesn’t bark to play, Mr. Pumpkin will come over and meow at her to get her to chase him. And though Mr. Pumpkin still has his claws, he never takes them out. He is very gentle with his little sister. I am thrilled that the two of them have each other, and that they get along so well.

What I love about their relationship is that, sometimes, when I go into the garage to do laundry, Mr. Pumpkin will paw open the door and come towards me. And not too far behind is Gracie peeking her head in. Super cute!

So this past weekend, I was decorating a diaper cake for a friend’s baby shower. My first diaper cake ever. (I had to watch a lot of youtube videos and look at tons of pictures to figure out how to make one.) I placed a little mermaid on top as a finishing touch, and Pumpkin came over and just started pawing at the mermaid and topped her over… 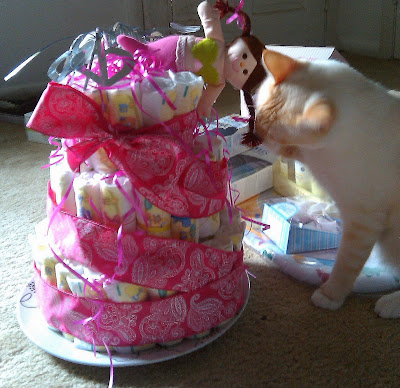 Of course, my sweet Gracie couldn’t help but find some ribbon to play with. And Mr. Pumpkin followed suit. 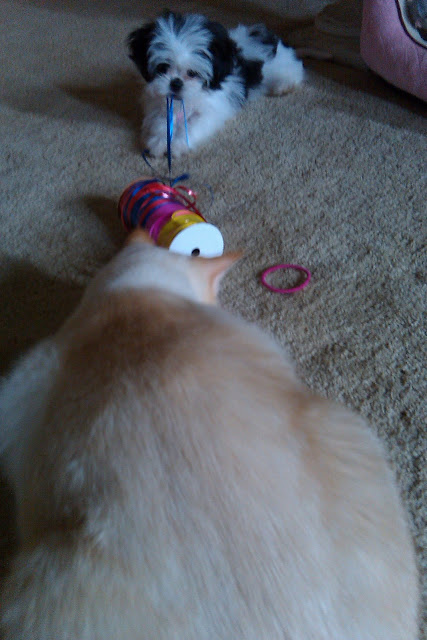 (Sorry the lighting is not so great. I don’t have the best camera, or lights in my home. Though these photos were taken with my Droid’s camera.)

Now for some creepy…. check out Gracie with no eyes. 🙂 Her hair is getting a bit unruly. 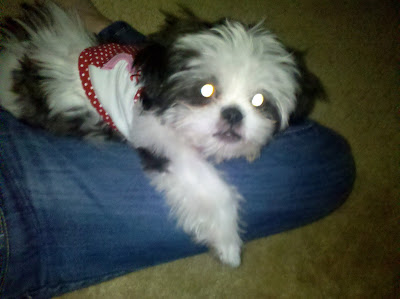 « Mama Gave me a Bad Haircut
My Little Monster »