I seriously think that Gracie is the most perfect puppy a first time dog owner can have! She’s only six weeks old, but she’s been controlling her little bladder perfectly. I have been technically crate training her (though she only stays in her crate when I’m at work during the day), and she has not had a few “accidents” in my home.
One “accident” was because I had allowed her to walk to the front door from her room, instead of picking her up immediately after feeding her (which is my habit). Once she got a few feet from the door, she couldn’t hold it anymore and she pooped on the carpet. I immediately swooped her up, said “NO” loudly, and took her outside. Unfortunately the deed was done, so I don’t think she realized what was going on. She is still young, after all. But I won’t make that mistake again. From that day onward, I have picked her up several minutes after she finished eating and drinking and took her outside.

So you might be wondering, why no puppy pads? I have asked friends who are pet owners about training my dog with pee-wee pads, and they have said that if I started training Gracie with the pads, she would always go to the bathroom in the house. I don’t want her to get into that habit, so I’m training her to go outside.
Plus, the first night that I got her, I did try a pee-wee pad. (I had thought it would be more convenient for when it rains and there’s bad weather outside). She did go on the puppy pad, since her breeder had trained the litter to use newspaper outside their crate… but I noticed the next morning that Mr. Pumpkin, my cat, had also used the pad… and had missed, peeing on the carpet. As you may know, cat pee is the worst smell in the world and very difficult to get rid of. So I’m guessing there is some pet rivalry going on there.
For the time being, I am training Gracie to go outside only. So far, it’s worked. She has a favorite spot to go poop. It’s behind one of the bushes outside. After she eats, and first thing in the morning after I feed her, I take Gracie outside to do her business. So far, she does it every time. Of course, it does take her a little while. She loves eating grass, sniffling around, and chasing after me. But after about five minutes, she ends up going. I always give her lots of love and kisses afterwards.
She sleeps with me in the bed every night, and so far, she has not peed or pooped in the bed. At all. I just felt that it would help her bond with me better if she was able to sleep with me. Plus, no whining at night! She sleeps through the night, and is simply the sweetest cuddliest thing ever!
But in the next few weeks, as she grows, I wonder what potty training will bring. It’s been very easy so far! She’s still very small, and I am going to be a tad bit heartbroken once she grows. I love her being so little! 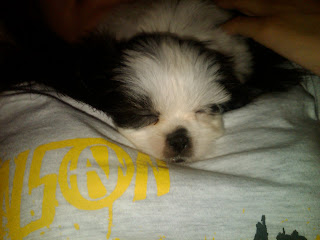 (She is a very active little girl, so I can only snap photos of her when she’s asleep. Yes, I love Hanson – the band!)